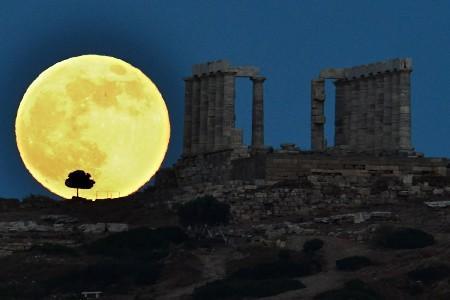 Athens, visit Sounion and board to cruise the Aegean for a seven-day cruise!
From Athens a scenic drive along the coast to visit Cape Sounion and Temple of Poseidon (This is only possible if your arrival to Athens takes place before noon). The next day we board on a cruise to the Eastern Mediterranean, island hopping to Mykonos, Patmos, Rhodes, Santorini and Crete. The cruise will be followed by a city tour of Athens and will include its most important sights and attractions, including the Acropolis and the New Acropolis Museum. This holiday itinerary is similar to that of Leto, but includes the Athens City Tour, even though it features one less night in Athens.

Transfer to a centrally located hotel. Check-in and lunch at hotel. Early afternoon, depart for a drive along the beautiful Attika coast to Cape Sounion, the most southerly point of the mainland, for a guided visit of the Poseidon Temple, standing majestically on the cliff, overlooking the Aegean Sea. The tour passes through some of the most expensive seaside areas, along what is often called "the Gold Coast." Overnight Athens.

After breakfast, meet our representative and transfer to the port of Piraeus to embark on your 7-Day Cruise of the Eastern Mediterranean. Your ports of call for the next 7 days will start withIstanbul, where you'll have an evening and nearly full day to explore this exotic, vibrant city. Afterwards, your ship will call at Mykonos, Patmos, Rhodes, Heraklion, Crete, and Santorini. You'll have a considerable amount of time at each destination to explore, shop, or simply admire the scenery and architecture, and learn more about the Greek lifestyle and culture.

We will await you upon disembarkation at the port, then depart for an orientation tour of Athens with our professional guide, passing by the most important ancient and modern monuments of town. Stop at the foot of the Acropolis for an extensive visit of the site, which includes the New Acropolis Museum. After a walk through Plaka, the old town of Athens, drive to the hotel for check-in. Overnight Athens.

After breakfast, our representative will transfer you to the airport for your home-bound flight, or, if continuing on to another location, to the port/airport for the continuation of your holiday.